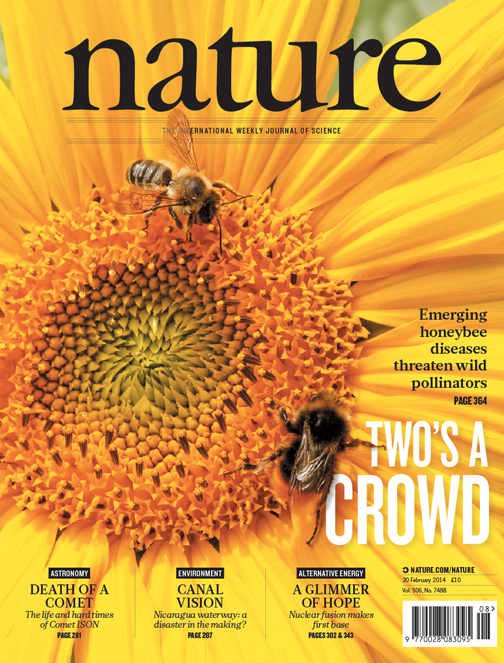 Nature’s art director, Kelly Krause, explains why they chose one of my photos to lead a story on the emerging threat of honeybee diseases to wild pollinators.

Nowadays the photography industry is dominated by web publication, with printed media – and therefore the sale of photos destined for print – in long term decline. It is still satisfying to see a photo published on the website of a major news channel or magazine, but it’s just not quite the same as seeing one used in print.

That’s why I was thrilled when one of my images, “A bumblebee and honeybee collect sunflower nectar,” was used for the cover of Nature magazine. It led a story on the emerging threat of honeybee diseases to wild pollinators. Nature’s art director, Kelly Krause, explains why they chose this picture for the cover:

“We received some gorgeous bee photos from Matthias Fürst, one of the authors of the paper, and considered using one in particular: a striking photo of a dead bumblebee. But in the end we decided against it, as it perhaps made their plight seem just a shade too dire. Instead, we decided to search for an image of a honeybee and bumblebee on the same flower—a tougher job than it seems!

“But our amazing picture team found this shot, with both Apis mellifera and Bombus terrestris clearly present and in focus, on a healthy, good-looking flower. A perfect match for our cover photo, but a possibly deadly encounter for the bumblebee.”

It’s perhaps worth mentioning that the magazine was published back in 2014, but I only stumbled upon it recently. Photo agencies like to keep their client list a closely guarded secret, so of the thousands of image licences that I sell each year, I only get to see a tiny fraction in use.